As UN Secretary General Antonio Guteress said inits comment on COP 26 outcome: the approved texts are a compromise. They reflect the interests, the conditions, the contradictions and the state of political will in the world today. They take important steps, but unfortunately the collective political will was not enough to overcome some deep contradictions.

The fact is that the present set of Nationally Determined Contributions - even if fully implemented - will still increase emissions this decade on a pathway that will clearly lead us to well above 2 degrees by the end of the century compared to pre-industrial levels. [….] It is time to go into emergency mode — or our chance of reaching net zero will itself be zero.

We can conclude that there’s no a mandatory outcome that offer to the business environment a new scenario. But the goals on moving towards zero carbon around the middle of the century and to pursue a climate resilient development are clear and are not questioned. And this is beneficial for the business environment, because it is well known and confirmed where the market is going to invest, and help to reduce uncertainty for the future of business.

We are not mistaken in pursuing the highest environmental outcome for products and services that business can offers to the market. This is the answer to the social and political direction agreed. And how soon this is done, means gaining benefits in competition, reputation and market confidence for businesses.

The commitment also from finance to support the transition is confirmed. The Mark Carney-led Glasgow Financial Alliance for Net Zero (GFANZ), a coalition of coalitions which by COP26 included financial institutions representing US$130 trillion in capital or roughly 40% of the financial system. The third commitment of Paris Agreement on making finance flows consistent with climate goals is on the move.

There’s still a concern on diﬃculties in financing the green transition and mainly the climate adaptation in developing countries. So we know that this issue have to be tackled in next years, hopefully as soon as possible. This is not only about solidarity, because climate adaptation everywhere in the world, means natural resources resilience and regeneration, with benefits on prosperity for the world economy in its whole, now and in the future to come.

But the financial solution has not yet been identified, because until a systemic approach in politics analysis and design is missing, we cannot find the right way.

In the EU, enterprises can benefits from a growing system of economic incentives. The new one included in the recovery measures from COVID-19 within the Next Generation EU package, and looking forward to the enabling environment launched with the fit for 55 package. This includes carbon tax, ETS system enlargement, the border carbon tax - that can help EU industries to compete in a level playing fields with countries that haven’t embraced the same climate goals and commitment, with the green investment packages required by retail markets and pushed by new EU regulatory system on financial activities.

But money in itself, is only the fuel. It’s up on business to design the engine: strategies, plans, products and services aligned with the Paris commitment. Every enterprise to compete in the market, is now pushed to do its part endorsing a business model consistent with the climate goals, as its own business mission.

Business environment is in the middle of growing demand system pushing for sustainability: from top down to bottom up (fig.1).

Enterprises have to harmonise this two levels in their planning and strategic framework, to optimise economic incentives and a growing regulation system from top down, with a bottom up demand from civil society and consumers. But it requires will and genuine commitment to serve the green transition. Business actions require scientific knowledge, listening to stakeholders, transparency and coherence. 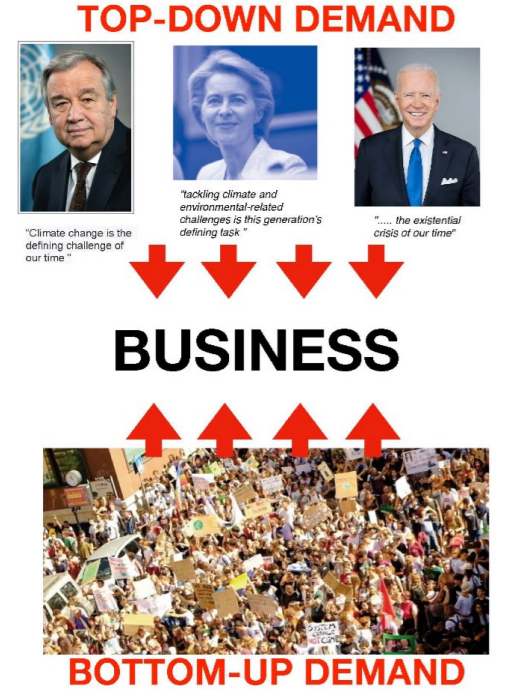 Fig.1 - Top-down and botton-up demand for a sustainable approach in business

And last but not least, it’s necessary to switch to a new paradigm: from money - to social and environmental outcome, as the ultimate goal of business. This is not utopia, is just accomplish what is decided in the Paris agreement: this means making financial flows consistent with climate goals.

According to EU Commission estimation,an extra-amount of520 billion every year are needed in the EU economyfor the green transition to 2030. It is not yet clear how this money can be issued, because whereas a substantial share of the investment will be borne by the private sector, public investment will have to increase as well.

But what is sure, is that we cannot lack investment in the green transition because is universally known that the cost of inaction is even higher than the cost of action. So we need to invest in climate mitigation and adaptation also to save financial stability. This money can be created only if we follow the conditionality required by green transition. So climate goals enshrined in the Paris Agreement and the last COP26 outcome, is becaming the new ruler to create money for the business environment, meanwhile money ﬂows for brown economy are shrinking. As it is well explained in the IPCC report 1.5 issued in 2018, decision making that achieves the UN SDGs, could help lead to a climate resilient world (ﬁg.2). 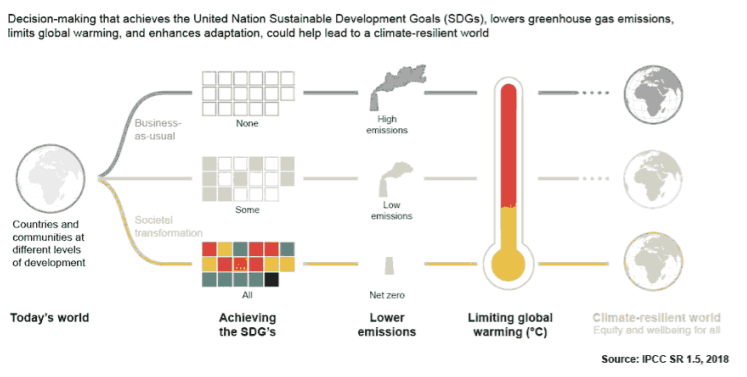 Because SDGs are interconnected and indivisible, as it declared in the UNGAdocument that has approved the UN 2030 Agendain 2015, it is crucial that we treat them in their entirety instead of approaching them as a menu list of individual goals to pick up and choose. Following only some of them is not the solution.

In short, we cannot achieve any effective improvement in tackling the challenge of our age without a system thinking approach.